Using the NASA/ESA Hubble Space Telescope, astronomers have discovered that the brightest galaxies within galaxy clusters “wobble” relative to the cluster’s centre of mass. This unexpected result is inconsistent with predictions made by the current standard model of dark matter. With further analysis it may provide insights into the nature of dark matter, perhaps even indicating that new physics is at work.

Dark matter constitutes just over 25 percent of all mass-energy in the Universe but cannot be directly observed, making it one of the biggest mysteries in modern astronomy. Invisible halos of elusive dark matter enclose galaxies and galaxy clusters alike. The latter are massive groupings of up to a thousand galaxies immersed in hot intergalactic gas. Such clusters have very dense cores, each containing a massive galaxy called the “brightest cluster galaxy” (BCG).

The standard model of dark matter (cold dark matter model) predicts that once a galaxy cluster has returned to a “relaxed” state after experiencing the turbulence of a merging event, the BCG does not move from the cluster’s centre. It is held in place by the enormous gravitational influence of dark matter.

But now, a team of Swiss, French, and British astronomers have analysed ten galaxy clusters observed with the NASA/ESA Hubble Space Telescope, and found that their BCGs are not fixed at the centre as expected [1].

“We found that the BCGs wobble around centre of the halos,” explains David Harvey, astronomer at EPFL, Switzerland, and lead author of the paper. “This indicates that, rather than a dense region in the centre of the galaxy cluster, as predicted by the cold dark matter model, there is a much shallower central density. This is a striking signal of exotic forms of dark matter right at the heart of galaxy clusters.”

The wobbling of the BCGs could only be analysed as the galaxy clusters studied also act as gravitational lenses. They are so massive that they warp spacetime enough to distort light from more distant objects behind them. This effect, called strong gravitational lensing, can be used to make a map of the dark matter associated with the cluster, enabling astronomers to work out the exact position of the centre of mass and then measure the offset of the BCG from this centre.

If this “wobbling” is not an unknown astrophysical phenomenon and in fact the result of the behaviour of dark matter, then it is inconsistent with the standard model of dark matter and can only be explained if dark matter particles can interact with each other — a strong contradiction to the current understanding of dark matter. This may indicate that new fundamental physics is required to solve the mystery of dark matter.

Co-author Frederic Courbin, also at EPFL, concludes: “We’re looking forward to larger surveys — such as the Euclid survey — that will extend our dataset. Then we can determine whether the wobbling of BGCs is the result of a novel astrophysical phenomenon or new fundamental physics. Both of which would be exciting!”
Notes

[1] The study was performed using archive data from Hubble. The observations were originally made for the CLASH and LoCuSS surveys. 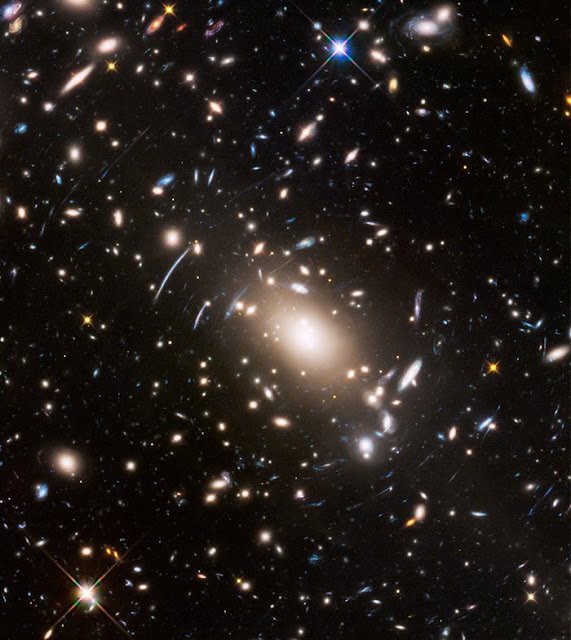 Abell S1063, a galaxy cluster, was observed by the NASA/ESA Hubble Space Telescope as part of the Frontier Fields programme. The huge mass of the cluster acts as a cosmic magnifying glass and enlarges even more distant galaxies, so they become bright enough for Hubble to see. 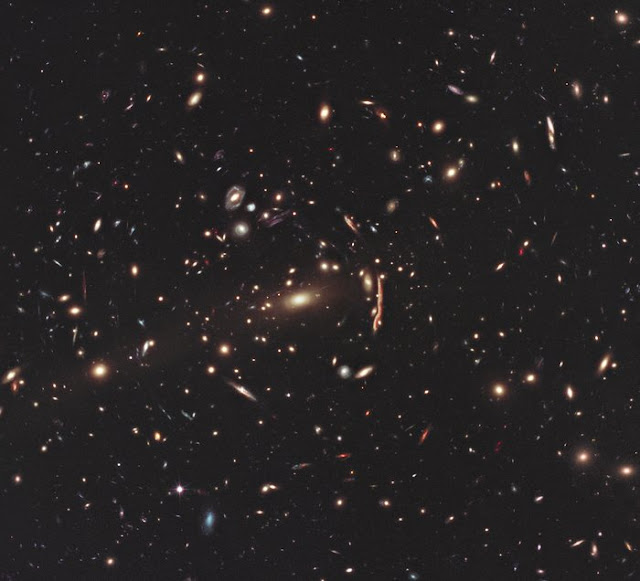 This image from the NASA/ESA Hubble Space Telescope shows the galaxy cluster MACS J1206. Galaxy clusters like these have enormous mass, and their gravity is powerful enough to visibly bend the path of light, somewhat like a magnifying glass.

These clusters are useful tools for studying very distant objects, because this lens-like behaviour amplifies the light from faraway galaxies in the background. They also contribute to a range of topics in cosmology, as the precise nature of the lensed images encapsulates information about the properties of spacetime, the expansion of the cosmos and the distribution of dark matter within the cluster.
This is one of 25 clusters being studied as part of the CLASH (Cluster Lensing and Supernova survey with Hubble) programme, a major project to build a library of scientific data on lensing clusters. 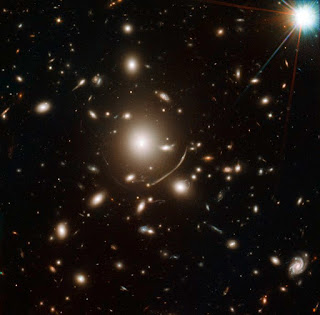 The giant galaxy cluster in the centre of this image contains so much dark matter mass that its gravity bends the light of more distant objects. This means that for very distant galaxies in the background, the cluster’s gravitational field acts as a sort of magnifying glass, bending and concentrating the distant object’s light towards Hubble. These gravitational lenses are one tool astronomers can use to extend Hubble’s vision beyond what it would normally be capable of observing. This way some of the very first galaxies in the Universe can be studied by astronomers.
The lensing effect can also be used to determine the distribution of matter — both ordinary and dark matter — within the cluster. 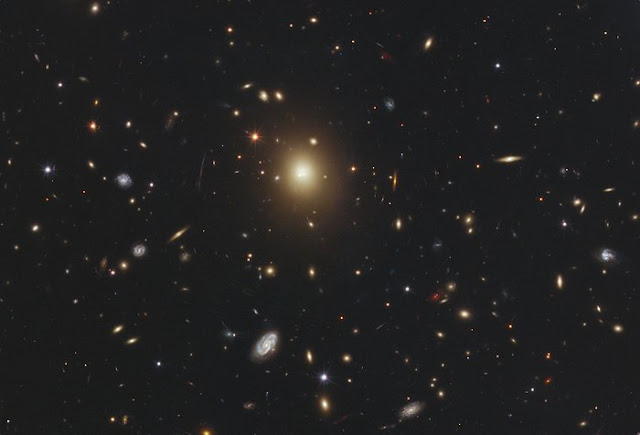 The giant elliptical galaxy in the centre of this image, taken by the NASA/ESA Hubble Space Telescope, is the most massive and brightest member of the galaxy cluster Abell 2261. Astronomers refer to it as the brightest cluster galaxy (BCG). Spanning a little over one million light-years, the galaxy is about 20 times the diameter of our Milky Way galaxy.
Astronomers used Hubble's Advanced Camera for Surveys and Wide Field Camera 3 to measure the amount of starlight across the galaxy, catalogued as 2MASX J17222717+3207571 but more commonly called A2261-BCG (short for Abell 2261 brightest cluster galaxy). Abell 2261 is located three billion light-years away.
The observations were taken between March and May 2011. The Abell 2261 cluster is part of a multi-wavelength survey called the Cluster Lensing And Supernova survey with Hubble (CLASH). 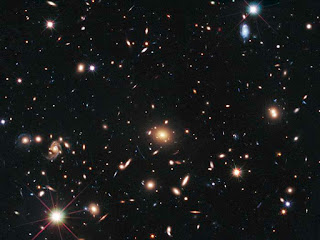 The heart of a vast cluster of galaxies called MACSJ1720+35 is shown in this image, taken in visible and near-infrared light by the NASA/ESA Hubble Space Telescope.

The galaxy cluster is so massive that its gravity distorts, brightens, and magnifies light from more distant objects behind it, an effect called gravitational lensing. In the top right an exploding star nicknamed Caracalla and located behind the cluster can just be made out.

The supernova is a member of a special class of exploding star called Type Ia, prized by astronomers because it provides a consistent level of peak brightness that makes it reliable for making distance estimates.

Finding a gravitationally lensed Type Ia supernova gives astronomers a unique opportunity to check the optical "prescription" of the foreground lensing cluster. The supernova is one of three exploding stars discovered in the Cluster Lensing And Supernova survey with Hubble (CLASH), and was followed up as part of a Supernova Cosmology Project HST program. CLASH is a Hubble census that probed the distribution of dark matter in 25 galaxy clusters. Dark matter cannot be seen directly but is believed to make up most of the universe's matter.

The image of the galaxy cluster was taken between March and July 2012 by Hubble's Wide Field Camera 3 and Advanced Camera for Surveys. 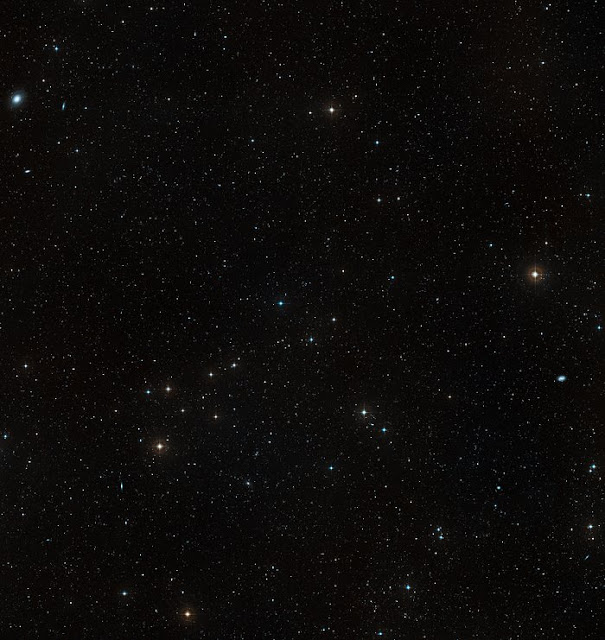 This ground-based image shows the galaxy cluster Abell S1063 and its surroundings. 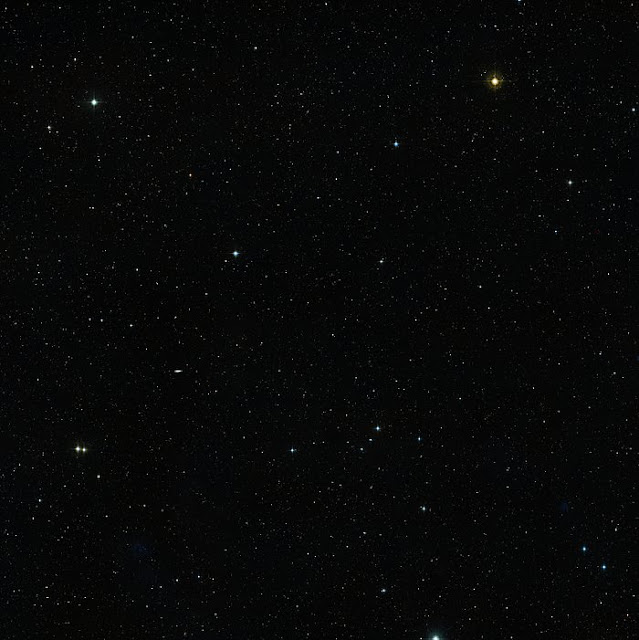 This ground-based image, from the Digitized Sky Survey 2, shows the area around galaxy cluster MACS J1206.2-0847 (or MACS 1206) for short. The cluster has been observed by Hubble as part of CLASH (Cluster Lensing and Supernova survey with Hubble), a major programme to observe galaxy clusters whose gravity bends and distorts light passing through them.

http://www.spacetelescope.org/videos/heic1615b/
This video pans over NASA/ESA Hubble Space Telescope observations of the galaxy cluster Abell S1063, which were made as part of the Frontier Fields programme. The many galaxies within the cluster become clearly visible, as well as the background galaxies, enlarged by gravitational lensing.

http://www.spacetelescope.org/videos/heic1106c/
This video pans across a giant cluster of elliptical galaxies which contains so much mass that its gravity bends light beams. This means that for very distant galaxies in the background, the cluster acts as a sort of magnifying glass, bending the path of the distant object’s light towards Hubble. These gravitational lenses are one tool that astronomers can use to extend Hubble’s vision beyond its normal range.
Using Abell 383, a team of astronomers have identified and studied a galaxy so far away we see it as it was less than a billion years after the Big Bang. Viewing this galaxy through the gravitational lens meant that the scientists were able to discern many intriguing features that would otherwise have remained hidden, including that its stars were unexpectedly old for a galaxy this close to the beginning of the Universe. This has profound implications for our understanding of how and when the first galaxies formed, and how the Universe first became transparent to ultraviolet light.

http://www.spacetelescope.org/videos/heic1115b/
This video pans across galaxy cluster MACS J1206.2-0847 (or MACS 1206 for short). The cluster has been observed by Hubble as part of CLASH (Cluster Lensing and Supernova survey with Hubble), a major programme to observe galaxy clusters whose gravity bends and distorts light passing through them.