Thanks to an impressive collaboration bringing together data from ground-based telescopes, all-sky surveys and space-based facilities — including the NASA/ESA Hubble Space Telescope — a rare self-destructing asteroid called 6478 Gault has been observed.

Clear images from the NASA/ESA Hubble Space Telescope have provided researchers with new insight into asteroid Gault’s unusual past. The object is 4–9 kilometres wide and has two narrow, comet-like tails of debris that tell us that the asteroid is slowly undergoing self-destruction. Each tail is evidence of an active event that released material into space.

Gault was discovered in 1988. However, this observation of two debris tails is the first indication of the asteroid’s instability. This asteroid one of only a handful to be caught disintegrating by a process known as a YORP torque. When sunlight heats an asteroid, the infrared radiation that escapes from its warmed surface carries off both heat and momentum. This creates a small force that can cause the asteroid to spin faster. If this centrifugal force eventually overcomes gravity, the asteroid becomes unstable. Landslides on the object can release rubble and dust into space, leaving behind a tail of debris, as seen here with asteroid Gault.

“This self-destruction event is rare”, explained Olivier Hainaut (European Southern Observatory, Germany). “Active and unstable asteroids such as Gault are only now being detected by means of new survey telescopes that scan the entire sky, which means asteroids such as Gault that are misbehaving cannot escape detection any more.”

Astronomers estimate that among the 800,000 known asteroids that occupy the Asteroid Belt between Mars and Jupiter, YORP disruptions occur roughly once per year. The direct observation of this activity by the Hubble Space Telescope has provided astronomers with a special opportunity to study the composition of asteroids. By researching the material that this unstable asteroid releases into space, astronomers can get a glimpse into the history of planet formation in the early ages of the Solar System.

Understanding the nature of this active and self-destructive object has been a collaborative effort involving researchers and facilities around the world. The asteroid’s debris tail was first detected by the University of Hawaiʻi/NASA ATLAS (Asteroid Terrestrial-Impact Last Alert System) telescopes in the Hawaiian Islands on 5 January 2019. Upon review of archival data from ATLAS and UH/NASA Pan-STARRS (Panoramic Survey Telescope and Rapid Response System), it was found that the object’s larger tail of debris had been observed earlier in December 2018. Shortly thereafter, in January 2019, a second, shorter tail was seen by various telescopes, including the Isaac Newton, William Herschel, and ESA OGS Telescopes in La Palma and Tenerife, Spain; the Himalayan Chandra Telescope in India; and the CFHT in Hawaiʻi. Subsequent analysis of these observations suggested that the two events that produced these debris trails occurred around 28 October and 30 December 2018, respectively. These tails will only be visible for only a few months, after which the dust will have dispersed into interplanetary space.

Follow-up observations were then made by various ground-based telescopes. These data were used to deduce a two-hour rotation period for Gault, which is very close to the critical speed at which material will begin to tumble and slide across the asteroid’s surface before drifting off into space.

“Gault is the best ‘smoking-gun’ example of a fast rotator right at the two-hour limit”, explained lead author Jan Kleyna (University of Hawaiʻi, USA). “It could have been on the brink of instability for 10 million years. Even a tiny disturbance, like a small impact from a pebble, might have triggered the recent outbursts.”

Hubble’s sharp imaging provided valuable detail regarding the asteroid’s activity. From the narrow width of the streaming tails, researchers inferred that the release of material took place in short episodes lasting from a few hours to a couple of days. From the absence of excess dust in the immediate vicinity of the asteroid, they concluded that the asteroid’s activity was not caused by a collision with another massive object. Researchers hope that further observations will provide even more insight into this rare and curious object.

The team’s results have been accepted for publication in The Astrophysical Journal Letters. 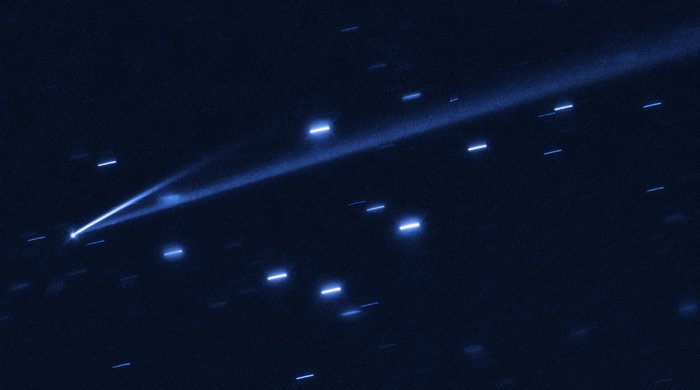 The asteroid 6478 Gault is seen with the NASA/ESA Hubble Space Telescope, showing two narrow, comet-like tails of debris that tell us that the asteroid is slowly undergoing self-destruction. The bright streaks surrounding the asteroid are background stars. The Gault asteroid is located 214 million miles from the Sun, between the orbits of Mars and Jupiter.

Gault within the solar system

This animation demonstrates the orbital characteristics of the asteroid 6478 Gault that is located 214 million miles from the Sun, between the orbits of Mars and Jupiter.

Pan across the Gault asteroid

This video pans over NASA/ESA Hubble Space Telescope observations of the Gault 6478 asteroid, located 214 million miles from the Sun, between the orbits of Mars and Jupiter.