New family photos of Mars and Saturn from Hubble

In summer 2018 the planets Mars and Saturn are, one after the other, in opposition to Earth. During this event the planets are relatively close to Earth, allowing astronomers to observe them in greater detail. Hubble took advantage of this preferred configuration and imaged both planets to continue its long-standing observation of the outer planets in the Solar System.

Since the NASA/ESA Hubble Space Telescope was launched, its goal has always been to study not only distant astronomical objects, but also the planets within our Solar System. Hubble’s high-resolution images of our planetary neighbours can only be surpassed by pictures taken from spacecraft that actually visit these bodies. However, Hubble has one advantage over space probes: it can look at these objects periodically and observe them over much longer periods than any passing probe could.

In the last months the planets Mars and Saturn have each been in opposition to Earth — Saturn on 27 June and Mars on 27 July. An opposition occurs when the Sun, Earth and an outer planet are lined up, with Earth sitting in between the Sun and the outer planet. During an opposition, a planet is fully lit by the Sun as seen from Earth, and it also marks the time when the planet is closest to Earth, allowing astronomers to see features on the planet’s surface in greater detail [1].

A month before Saturn’s opposition — on 6 June — Hubble was used to observe the ringed planet [2]. At this time Saturn was approximately 1.4 billion kilometres from Earth. The taken images show Saturn’s magnificent ring system near its maximum tilt toward Earth, allowing a spectacular view of the rings and the gaps between them. Though all of the gas giants boast rings, Saturn’s are the largest and most spectacular, stretching out to eight times the radius of the planet.

Alongside a beautiful view of the ring system, Hubble’s new image reveals a hexagonal pattern around the north pole — a stable and persistent wind feature discovered during the flyby of the Voyager 1 space probe in 1981. To the south of this feature a string of bright clouds is visible: remnants of a disintegrating storm.

While observing the planet Hubble also managed to capture images of six of Saturn’s 62 currently known moons: Dione, Enceladus, Tethys, Janus, Epimetheus, and Mimas. Scientists hypothesise that a small, wayward moon like one of these disintegrated 200 million years ago to form Saturn’s ring system.

Hubble shot the second portrait, of the planet Mars, on 18 July, just 13 days before Mars reached its closest approach to Earth. This year Mars will get as close as 57.6 million kilometres from Earth. This makes it the closest approach since 2003, when the red planet made its way closer to us than at any other time in almost 60 000 years (opo0322).

While previous images showed detailed surface features of the planet, this new image is dominated by a gigantic sandstorm enshrouding the entire planet. Still visible are the white polar caps, Terra Meridiani, the Schiaparelli Crater, and Hellas Basin — but all of these features are slightly blurred by the dust in the atmosphere.

Comparing these new images of Mars and Saturn with older data gathered by Hubble, other telescopes and even space probes allows astronomers to study how cloud patterns and large-scale structures on other planets in our Solar System change over time.
Notes

[1] The dates of opposition and closest approach differ slightly. This difference is caused by the elliptical orbit of the planets and the fact that the orbits are not in exactly the same plane.

[2] The observations of Saturn were made as part of the Outer Planet Atmospheres Legacy (OPAL) project. OPAL is helping astronomers understand the atmospheric dynamics and evolution of the gas giant planets in our Solar System. Jupiter, Uranus and Neptune have already been observed several times as part of this project, but this is the first time Saturn was observed as part of OPAL.

Mars and Saturn close to opposition

Hubble’s high-resolution images of the planets and moons in our Solar System can only be surpassed by pictures taken from spacecraft that actually visit them. Hubble even has one advantage over these probes: it can look at these objects periodically and observe them over much longer periods than any passing probe could. 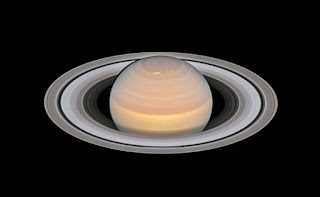 The NASA/ESA Hubble Space Telescope was used to observe the planet on 6 June 2018, when Saturn was approximately 1.4 billion kilometres from Earth. Visible in this Hubble image are the classic rings as recorded by the very first astronomers to observe the planet with telescopes. From the outside in are the A ring with the Encke Gap, the Cassini Division, the B ring, and the C ring with the Maxwell Gap.

Data from NASA’s Cassini mission suggest that the rings formed about 200 million years ago, roughly around the time of the dinosaurs during the Jurassic period. The gravitational disintegration of one of Saturn’s small moons created myriad icy debris particles and collisions lasting until today; it is likely that they continually replenish the rings.

The planet’s banded structure, clearly visible in the new image, is caused by the winds and the clouds at different altitudes.

Stormy Mars in opposition in 2018 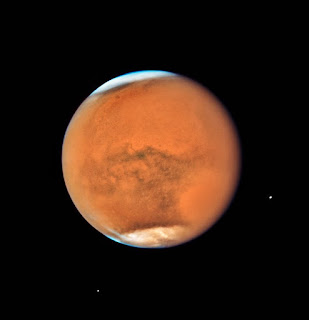 In mid-July the NASA/ESA Hubble Space Telescope observed Mars, only 13 days before the planet made its closest approach to Earth in 2018. While previous images showed detailed surface features of the planet, this new image is dominated by a gigantic sandstorm enshrouding the entire planet.
Each Martian year, moderately large dust storms cover continent-sized areas and last for weeks at a time. Global dust storms — lasting for weeks or months — tend to happen during the spring and summer in the southern hemisphere, when Mars is closest to the Sun and heating is at a maximum, leading to greater generation of winds.
While spacecraft orbiting Mars can study the storm’s behaviour at lower altitudes, Hubble observations allow astronomers to study changes in the higher atmosphere. The combined observations will help planetary scientists to build a better understanding of how these global storms arise.

The moons of Saturn 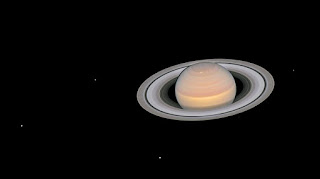 This composite image, taken by the NASA/ESA Hubble Space Telescope on 6 June 2018, shows the ringed planet Saturn with six of its 62 known moons. From left to right, the moons visible in this image are Dione, Enceladus, Tethys, Janus, Epimetheus, and Mimas.

The moons seen here are all icy and cratered. Enceladus is considered a candidate for the existence of primitive life because it is outgassing water vapour from a subsurface ocean. Based on data from the Cassini mission to Saturn, scientists hypothesise that a small, wayward moon like one of these disintegrated 200 million years ago to form Saturn’s ring system.

The image is a composite because the moons move during the Saturn exposures, and individual frames must be realigned to make a colour portrait.

The moons of Saturn (annotated) 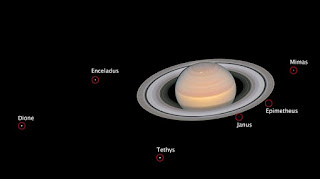 This composite image, taken by the NASA/ESA Hubble Space Telescope on 6 June 2018, shows the ringed planet Saturn with six of its 62 known moons.

With a diameter of 1123 kilometres, Dione is the fourth-largest of Saturn’s moons and the largest of the siblings in this family portrait. The smallest satellite in this picture is the irregularly shaped Epimetheus, with a size of 143 x 108 x 98 kilometres.

The image is a composite because the moons move during the Saturn exposures, and individual frames must be realigned to make a colour portrait.

Mars in opposition in 2018 (annotated) 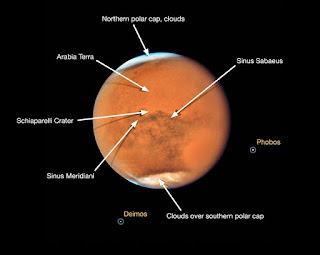 This annotated image of Mars shows features of the planet that were visible in summer 2018 despite a global dust storm. During the time of observation it was spring in Mars’ southern hemisphere, where a dust storm erupted and ballooned into a global event that is blanketing the entire planet. Even so, several distinctive features can be identified.

The large oval area at the lower right is the bright Hellas Basin. About 2200 kilometres across and nearly eight kilometres deep, it was formed about four billion years ago by an asteroid impact. Many global dust storms originate in this region.

The orange area in the upper centre of the image is Arabia Terra, a vast upland region in northern Mars. The landscape is densely cratered and heavily eroded, indicating that it could be among the oldest terrains on the planet.

South of Arabia Terra, running east to west along the equator, are the long dark features known as Sinus Sabaeus and Sinus Meridiani. These regions are covered by dark bedrock and fine-grained sand deposits ground down from ancient lava flows and other volcanic features. These sand grains are coarser and less reflective than the fine dust that gives the brighter regions of Mars their rusty appearance.

Because it is autumn in the northern hemisphere, a bright blanket of clouds covers the north polar region. Clouds also can be seen over the southern polar cap.

The two small moons of Mars, Phobos and Deimos, appear in the lower half of the image. 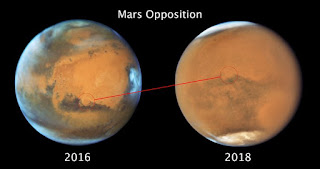 This image composite compares the observations of Mars made during the oppositions in 2016 and 2018.

The image taken in 2016 showed Mars during a cloudy day. However, the ancient and inactive shield volcano Syrtis Major, the bright and oval Hellas Planitia basin, the heavily eroded Arabia Terra, and the dark features of Sinus Sabaeous and Sinus Meridiani along the equator were all clearly visible.

The new image taken in 2018 captured the planet while it was enshrouded by a gigantic sandstorm. Still visible are the white polar caps, Terra Meridiani, the Schiaparelli Crater, and Hellas Basin — but all of these features are slightly blurred by the dust in the atmosphere.

Mars and Saturn are among the most popular planets. This new episode of the Hubblecast presents the images Hubble took of these planets in summer 2018.

Many other Hubblecast episodes are also available.

Find out how to view and contribute subtitles for the Hubblecast in multiple languages, or translate this video on YouTube.

https://www.spacetelescope.org/videos/heic1814b/
This video shows the Hubble observations of Saturn in June 2018. Hubble observed the ringed planet several times over the course of 20 hours, which allowed it to see some changes in the wind patterns in Saturn’s atmosphere. These changing patterns are most visible in the region surrounding the northern pole.

Saturn and its orbiting moons

The animation shows the rotation of Saturn as seen by Hubble, thanks to an observation spread over 20 hours. It also shows some of the brighter moons which were visible throughout the observation.

The surface and the moons of Mars

This animation shows the rotation of Mars over the course of 42 minutes and is based on observations made with the NASA/ESA Hubble Space Telescope.

While a host of Mars’s characteristic surface features are hidden by a planet-wide sandstorm, both the northern and southern polar ice caps are clearly visible.

Animation of difference in Mars orientation, 2016 and 2018

https://www.spacetelescope.org/videos/heic1814e/
This video shows the difference in orientation of Mars between the 2016 and 2018 observations, and it also illustrates the obscuration by the dust storm enshrouding the planet in 2018. The opening image, taken by the NASA/ESA Hubble Space Telescope on 12 May 2016, shows a clear atmosphere with summer in the northern hemisphere.
Three-dimensional models created from NASA’s Viking mission illustrate how the northern hemisphere was tilted away from Earth in 2018. The final image, taken by Hubble on 18 July 2018, shows a global dust storm, with spring in the southern hemisphere.