ASTRONOMÍA: The MESSENGER Education and Public Outreach (EPO) Team is launching a competition this week to name five impact craters on Mercury in conjunction with the IAU. The contest is open to everyone, except for members of the mission’s EPO team. The contest runs from 15 December 2014 to 15 January 2015.

The IAU stipulates that all new craters on Mercury must be named after an artist, composer, or writer who was famous for more than 50 years and has been dead for more than three years. See the current list of named Mercury craters at http://planetarynames.wr.usgs.gov/SearchResults?target=MERCURY&featureType=Crater,%20craters
The contest allows the public to immortalise an important person in the arts and humanities from anywhere in the world. Submissions will be accepted beginning midnight (00:00 UTC) on 15 December 2014, until 15 January 2015 (23:59 UTC). Fifteen finalist names for craters will be submitted to the IAU for selection of the five winners. Winning submissions will be announced by the IAU to coincide with the end of MESSENGER’s orbital operations in late March or April 2015. IAU decisions will be final.
NASA’s MESSENGER spacecraft has been in orbit about Mercury since March 2011. The mission’s EPO team is led by Julie Edmonds of the Carnegie Institution for Science.
The MESSENGER spacecraft has far surpassed expectations both in the duration of the mission and in the quality and quantity of data. The goal of MESSENGER was to take 2500 images of the planet, but is has returned more than 250 000 images. The mission will end this spring as the tiny craft impacts on Mercury. The EPO team organised the competition to celebrate the mission’s achievements.
Participants are recommended to first research the artist, composer, or writer under consideration before filling out the contest entry. Once online, registrants will be asked to submit a short description of their chosen individual’s contributions to their field, as well as an authoritative source for background information.
The name cannot have any political, religious, or military significance. Nor can other features in the Solar System have the same name. For example, Ansel Adams is not eligible because there is a feature on the Moon with the name Adams (even though it was named after other people called Adams, not Ansel). Participants can check their ideas against the list of named Solar System features and enter the name in the “Search by Feature Name” box in the upper right corner.
“We now have a detailed, high-resolution map of the entire planet,” Edmonds noted. “As scientists study the incredible data returned by MESSENGER, it becomes important to give names to surface features that are of special scientific interest. Having names for landforms such as mountains, craters, and cliffs makes it easier for scientists and others to communicate” .

Enter the contest online at: http://namecraters.carnegiescience.edu/ 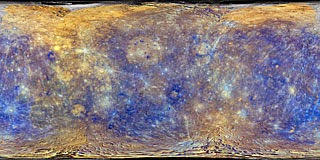 This enhanced colour view of the planet Mercury was obtained by the MESSENGER probe. These colours are not what Mercury would look like to the human eye, but rather the colours enhance the chemical, mineralogical, and physical differences between the rocks that make up Mercury's surface. Further information about this image is available here.

MESSENGER (MErcury Surface, Space ENvironment, GEochemistry, and Ranging) is a NASA-sponsored scientific investigation of the planet Mercury and the first space mission designed to orbit the planet closest to the Sun. The MESSENGER spacecraft was launched on August 3, 2004, and entered orbit about Mercury on March 18, 2011 (UTC), to begin its primary mission — a year long study of its target planet. MESSENGER’s first extended mission began on March 18, 2012, and ended one year later. MESSENGER is now in a second extended mission, which is scheduled to conclude in late March or April 2015. Sean C. Solomon, the Director of Columbia University’s Lamont-Doherty Earth Observatory, leads the mission as Principal Investigator. The Johns Hopkins University Applied Physics Laboratory built and operates the MESSENGER spacecraft and manages this Discovery-class mission for NASA.
The IAU is the international astronomical organisation that brings together more than 10 000 professional astronomers from almost 100 countries. Its mission is to promote and safeguard the science of astronomy in all its aspects through international cooperation. The IAU also serves as the internationally recognised authority for assigning designations to celestial bodies and the surface features on them. Founded in 1919, the IAU is the world's largest professional body for astronomers.
Astronomía Geografía General