29 August 2014 – The United Nations World Health Organization (WHO) has identified six countries at risk for spread of the Ebola virus disease, adding that it is working with them to ensure that full surveillance, preparedness and response plans are in place.

“The following countries share land borders or major transportation connections with the affected countries and are therefore at risk for spread of the Ebola outbreak: Benin, Burkina Faso, Côte d’Ivoire, Guinea-Bissau, Mali, and Senegal,” the agency said in the first in a series of regular updates on the Ebola response roadmap that was issued yesterday.

“WHO and a range of partners are working with countries to ensure that full Ebola surveillance, preparedness and response plans are in place in these countries,” it added.

WHO’s Ebola Response Roadmap Situation Report 1 features up-to-date maps containing hotspots and hot zones, as well as epidemiological data showing how the outbreak is evolving over time. It also communicates what is known about the location of treatment facilities and laboratories.

It follows the release on Thursday of an Ebola response roadmap that aims to stop the transmission of Ebola virus disease (EVD) within six to nine months.

The update noted that although the numbers of new cases reported in Guinea and Sierra Leone had been relatively stable, last week saw the highest weekly increase yet in Guinea, Sierra Leone and Liberia, highlighting “the urgent need to reinforce control measures and increase capacity for case management.” 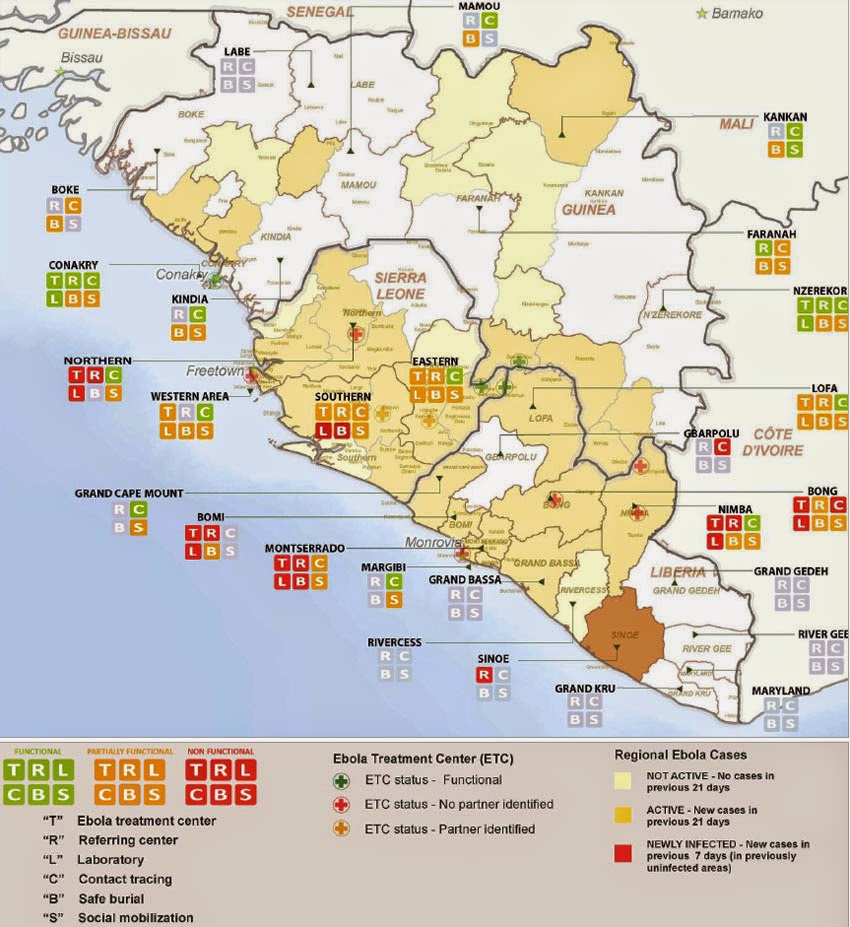 This map shows the availability of the six interventions that are necessary to control Ebola in the countries with most intense transmission. Work is ongoing to fully assess the coverage and quality of each intervention in the affected areas. Credit: WHO
“There are serious problems with case management and infection prevention and control,” WHO said. “The situation is worsening in Liberia and Sierra Leone.”

The capacity to manage the current load of EVD cases is currently adequate in Guéckédou and in Conakry in Guinea, but in Liberia, “the capacity to cope with the increasing caseload remains dramatically low, especially in the capital, Monrovia, as well as in Bong and Nimba counties” and in Sierra Leone, there is inadequate capacity to accommodate patients in Freetown. 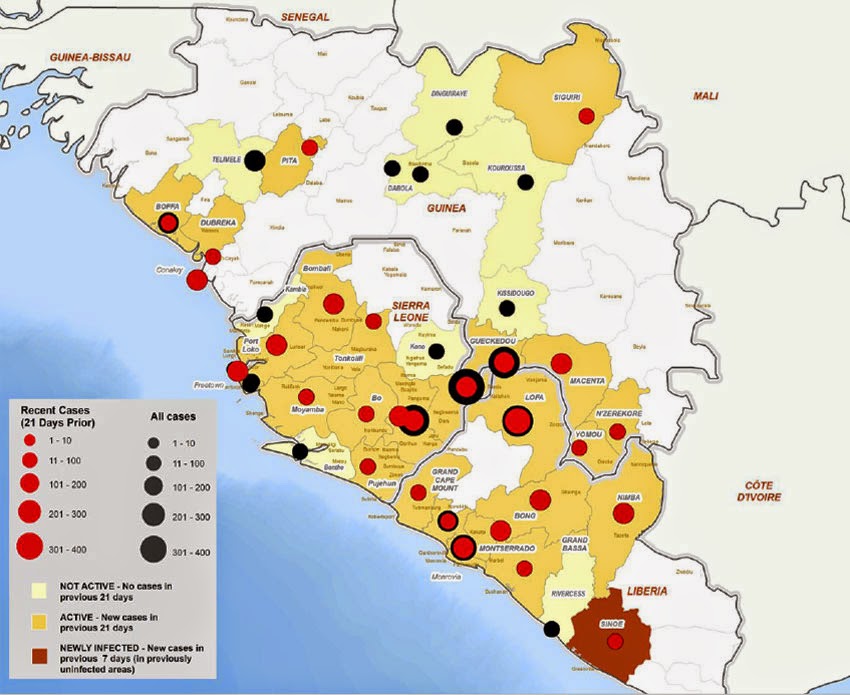 The map shows the location of cases throughout the countries with most intense transmission, differentiating the cumulative number of cases to date in each area, and the number occurring within the past 21 days (i.e. corresponding to the incubation period for Ebola). Credit: WHO
“Health care workers continue to be seriously affected in all countries, especially in Liberia and Nigeria,” it said.
The latest official number of Ebola cases in Guinea, Liberia, Nigeria, and Sierra Leone stands at 3,069, with over 1,552 deaths, making this the largest Ebola outbreak ever recorded, WHO said.
In an address to a meeting on Thursday of the Economic Community of West African States (ECOWAS) in Ghana, WHO called on countries to avoid taking actions that compromise the efforts to effectively respond to the ongoing Ebola outbreak in the sub-region.
Dr. David Nabarro, the UN System Coordinator for Ebola, who just completed a visit of the affected countries, is expected to brief Member States in New York on Tuesday, along with WHO Director-General Margaret Chan and Deputy Secretary-General Jan Eliasson.
In addition, WHO announced that a meeting of global experts would take place in Geneva on 5 September on potential Ebola therapies and vaccines, potential risks and benefits, uses and barriers for various options, as well as existing experimental projects.
medicina